There are a lot of inaccuracies in this article, but least it marks one of the first times this year that the Western media has actually reported on the situation in Odessa. I was at the memorial today outside the locked gates of Kulikovo Square. There were three of us in a delegation sponsored by the United National Antiwar Coalition to monitor and report on the memorial. Other monitors came from about 10 European countries. [read more]


Report of May 2 events from Bruce Gagnon:

Many feared that there would be more violence in Odessa, Ukraine yesterday similar to what took well over 50 lives on May 2, 2014. But in fact the day was peaceful when up to 10,000 people gathered near the Trades Union Hall to place flowers and stand with the Mothers Committee in a make shift memorial. The public was blocked from having direct contact with the Trades Hall by huge numbers of local police, national security services and fully armed neo-Nazi Azov battalion members who have been incorporated into the newly formed 'National Guard' in Ukraine (equipped and trained by US Special Forces troops at a base in western Ukraine). [Read more]

Phil Wilayto on his way to the European Union meeting with head of Mothers Committee from Odessa:

I've left Odessa and will be in Brussels tomorrow. The president of the Mothers' Council on May 2 is scheduled to make a formal presentation about the May 2 memorial to a committee of the European Parliament. I've been asked to add my impressions and also report on UNAC'S Odessa Solidarity Campaign. What is happening in Ukraine today is critical to political developments in Eastern and Southern Europe, and developments there will go on to affect the rest of the world. Odessa is the real thing: a modern-day struggle against the re-emergence of fascism. And yesterday's turnout of thousands of Odessans in defiance of the fascist threats, official attempts at disruption and media hysteria defeated the best efforts of the extreme right-wing forces to terrorize the brave people of Odessa into submission. It was such a privilege to be there. I'll be looking for friends and allies to help in this ongoing campaign. Please see the material at www.unacpeace.org for more information.

Alexander Todovov shares his thoughts from May 2, 2014 when three of his close friends were killed inside the Trades Union Hall in Odessa, Ukraine.

Alexander is a lawyer and a journalist and is quite eloquent as he describes the "scary movie" experience on that fateful day when neo-Nazis killed more than 50 people inside the hall.

On that occasion local activists were gathering petition signatures on the Kulikovo Square that fronts the Trades Hall seeking a local referendum supporting local autonomy for the people after the US created coup d'etat in Kiev. When they were attacked by a huge horde of Nazi activists they ran inside the hall.

The Nazis then began throwing Molotov cocktails at the hall which quickly caught fire. As the smoke made it impossible to breathe inside the building people climbed onto the window ledges but were shot at by Nazis on the ground. Some jumped down and were beaten to death with bats. Many died inside the hall from smoke inhalation and burns. Only a few safely escaped that day.

Ievgen Milev, left, and Veronica Machulko testify at the European Parliament meeting on May 4. Ievgen lost his brother when the fascists set fire to the House of Trade Unions in Odessa's Kulikovo Square. Veronica's son was also in the building, but survived, then was arrested, then freed as a result of a militant protest by enraged parents. Veronica is now president of the Mothers' Council for May... 2, which for two years has been demanding an international investigation into the massacre. Just days before the May 2 memorial held this past Monday, her home was raided by federal security forces, called SBU, who confiscated her computer. Then she was ordered to report to the SBU for questioning at 8 am the morning of the memorial. She wasn't released until 10 pm, but then flew directly to Brussels tell her story. Every day in Odessa the lives of these brave people are in danger. UNAC will continue to support these courageous fighters for democracy.

Reports from the UNAC delegation to Odessa for the May 2nd memorial to those killed at the House of Trade Unions on May 2, 2014

An interview with an American living in Russia who came to Odessa to support the memorial.  Interview by Bruce Gagnon. 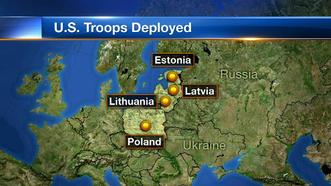 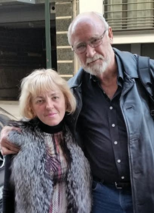 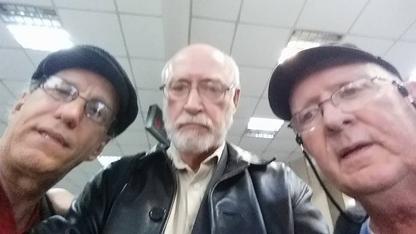 UNAC administrative committee member, Phil Wilayto with Victoria Machulko, president of the Mothers Counsel for May 2 from Odessa. Victoria was ordered to come in for questioning by the security forces at 8 o'clock on the morning of the May 2nd Memorial. She was not released until 10 that evening to ensure that she would miss the memorial. She and Phil are in Brussels now to testify before a committee of the European Parliament. She represents the true heroes of Odessa in this struggle against fascism 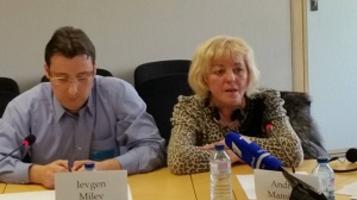 How much shit is Russia supposed to eat anyway? How many times can you kick Moscow in the teeth and expect it not to react. This is the essential US-NATO strategy today. Continue blasting Putin as the new Hitler in the western media. Destroy Ukraine - destabilize Moldova and other countries on or near the Russian border. Force Russia to react and then demonize Putin again and again. Eventually the rubber band snaps and the hot war begins. The US wants regime change in Moscow but how did such a venture go in Iraq or Libya? If the US-NATO can't handle Iraq how can they dream of taking on Russia? [read more]

The three members of UNAC'S delegation that traveled to Odessa on the Black Sea to help monitor the May 2 memorial in Kolikovo Square. From left, Bruce Gagnon, who coordinates a global network opposing nuclear weapons in space; Phil Wilayto, editor of The Virginia Defender newspaper: and Regis Tremblay, an independent documentary filmmaker who will be producing a video about this issue. Both Bruce and Regis are members of Veterans for Peace. All three of us are affiliated with the United National Antiwar Coalition - 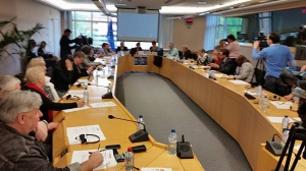 This was the scene yesterday (May 4) at the headquarters of the European Parliament in Brussels, Belgium. Three progressive elected deputies, two from Latvia and one from Estonia, covened the meeting to hear testimony about the May 2, 2014, massacre of 46 progressives by fascists in the city of Odessa, Ukraine, and the ongoing need for an international investigation into that horrific event.  Phil Wilayto went with Victoria Machulko, president of the Mothers Counsel for May 2 from Odessa to address this meeting.

The Scene of the Crime: Bruce Gagnon at Odessa Trade Hall
A powerful and keen analysis of the situation in Ukraine.