Below are recent interviews with members of the Administrative Committee of the United National Antiwar Coalition (UNAC).  These interviews were done during May and early June, 2020 during the height of the COVID-19 Pandemic in the US and some after the horrific murder of George Floyd

The United National Antiwar Coalition (UNAC) fights against wars at home and abroad. Our goal is to bring together organizations and movements representing people in struggle today and unify in collective action against the major perpetrator of war and injustice in the world: the U.S. government, along with its allies and proxies.

These are UNAC’s Principles of Unity:

1 - Opposition to all U.S. wars and interventions

UNAC holds that the U.S. government, and the corporations it serves, are the major cause of conflict and misery in the world today. Wars are greenlighted with no debate and no end point in order to maintain U.S. hegemony over resources and because war is hugely profitable to the war industry. We do not recognize the right of Washington to militarily intervene anywhere in the world, for any reason.  We oppose all U.S. wars, threats of war, proxy wars, blockades, sanctions, covert actions, cyberwars, drone wars, no-fly zones and any other interference in the internal affairs of other countries. We do not support the concept of “humanitarian intervention.” We call for the closing of all U.S. foreign bases, the elimination of all nuclear weapons and the transfer of trillions of tax dollars used to prepare for and conduct wars to meet domestic needs and provide reparations to the countries where the U.S. has caused human and material destruction.

We support the right of all oppressed peoples, including colonized and formerly colonized countries, to determine their own road to liberation. The U.S government has no right to dictate to other countries what leaders, social or economic systems they can have. If the U.S. were to end its attempt to control the world, other peoples would be much more able to make whatever changes they see fit in their own countries. We do not have to agree with a targeted country’s leaders in order to oppose U.S. aggression against that country. As political activists in the heart of the Empire, our job is to oppose U.S. imperialism. In the particular case of Palestine, we support the right of the Palestinian people to determine their own future and we oppose any U.S. aid to the colonial apartheid state of Israel. Domestically, we support the right of oppressed communities to practice self-determination and decide for themselves how to build their own organizations. We welcome such organizations into our coalition.

As the U.S. government seeks to continually reshape the world for the benefit of U.S. corporations, we all face endless imperialist wars and occupations that contribute to death, destruction and poverty around the globe.

The system’s insatiable need for energy resources is a major cause of war that subjects us to environmental contamination and the horrors of global warming.  Wars and climate change displace millions, producing the greatest refugee crisis in history. Here at home, wealth inequality has never been greater, yet the obscenely rich constantly strive to widen the gap while we pay for the murderous quest for riches by cuts to health care, education, housing, unemployment and low wages.

Racism, colonialism and neocolonialism are necessary adjuncts to imperialist aggression. Racism, sexism, homophobia and Islamophobia divide working people. Sexist exploitation, repression and violence against women are deeply ingrained in society at all levels and are used as tools of war. Further, a country engaged in endless predatory war inevitably itself becomes militarized. Domestic police forces now look and act like occupying armies. Drugs that originate in war-torn countries flood our communities, bringing violence and more suffering. UNAC opposes mass incarceration, the domestic wars of police brutality and murders in low-income communities, especially communities of color; the wars against immigrants, Muslims, women, the LGBTQ community, low-wage workers and the environment, while explaining the connections between the wars at home and those abroad. It is only by linking all fronts of the same war that we can build a people's movement that has the power to achieve real peace and justice.

4 - Independence from the parties of Big Business

Here in the U.S., basic democratic rights won through bitter struggles are being steadily taken away through rigged elections, gerrymandering and the disenfranchisement of people of color, youth, ex-prisoners and more. Despite whatever differences may exist between the Republican and Democratic parties, they both are controlled by the same big banks, corporations and other financial institutions.

When it comes to defending the economic interests of the 1 percent, both here at home and around the world, the only primary differences are over strategy, tactics and public relation images designed to appeal to different constituencies. While UNAC affiliates are free to support any electoral candidate they choose, as a coalition we do not ally ourselves with the parties of war.

5 - Mass mobilizations as a primary means of struggle

UNAC recognizes that there are many ways to fight for justice and peace and we support a wide range of tactics. At the same time, we understand that historically it has been mass mobilizations that have led to fundamental changes both here in the United States and in other countries. To prepare for these mobilizations, we emphasize continual education, outreach and support for local campaigns.

6 - Quick response to events at home and abroad

UNAC recognizes that we must be ready to respond quickly to political, economic and military developments. This has been our history as a coalition.

Since 9/11, our civil liberties increasingly have been under attack, from the passing of the Patriot Act to the National Defense Authorization Act (NDAA), which legalized indefinite detention. The government seeks to make speaking out a crime, claiming this supports terrorism. Whistleblowers are now the criminals. The Snowden revelations have revealed how massive the surveillance state has become, along with the militarization of the police. Support for the Boycott, Divestment and Sanctions campaign against Israel is being criminalized. The media parrots the government line. UNAC continues in the long tradition of antiwar and social justice activists being in the forefront of defense of civil rights and liberties and serves on the Board of the National Coalition to Protect Civil Freedoms

UNAC promotes the long-standing labor slogan of “An Injury to One is an Injury to All!” When one section of the movement is under attack, the entire movement must mobilize in support. We are particularly committed to defending our own affiliates from legal, political and physical repression.

9 - Commitment to a democratic decision-making process

UNAC believes that our coalition must reflect the kind of society that we want to build. As such, our highest decision-making body is our bi-annual conference, where affiliates propose, discuss, debate and vote on a national Plan of Action. Affiliates are invited to have a representative on the national Coordinating Committee (CC), which holds a bi-monthly national conference call and a periodic leadership gathering. The CC elects the members of the Administrative Committee (AC), which is responsible for guiding the coalition between conferences. The AC selects the national Co-Coordinators, who are responsible for the day-to-day work of the coalition.

If your organization agrees with these Principles of Unity, we invite you to affiliate with UNAC. 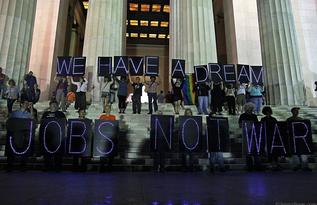